Holding down the fort

In this week’s update episode, Andrew talks about holding down the fort while his wife is away for the week. Plus, in the vocabulary lesson, he teaches you a useful phrasal verb: to take on [somebody/something].

Note: The transcript has been edited for clarity.

Andrew:  Hey there, everyone, how’s it going? It’s Andrew here and you’re listening to the Culips English Podcast. It’s good to be back here with you again, everyone. Thanks for pressing play on this episode and tuning in for some English listening practice. I think you made a great decision and I’m happy you’re joining me here today. If you’re new to Culips, it’s great to have you. We make audio lessons for English learners that are fun, motivational, and educational. Plus, we make them clear and easy to understand, so that you can level up your English skills quickly.

Maybe you can guess but I’m by myself here today, there are no cohosts joining me, and this will be another short mini episode, and also a vocabulary lesson. This is the third episode that I’ve done like this, so it’s kind of new. And I’m curious about what you guys think. So if you have any feedback for me, I would love to hear it, positive or negative, feel free to get in touch with me. You could send me a message on social media, or email me directly. My email address is andrew@culips.com. I read all the emails you guys send me and try to reply as soon as I can.

So it’s the start of a new week, guys, it’s another fresh opportunity to take on the world. I love it. I love the start of a new week. And I’m really excited for this week, because on Tuesday, the 31st of May, Kassy and I are going to be hosting the monthly Culips Members’ live stream. Now, it’ll be happening at 7:30pm Korean Standard Time, ’cause we both live here in Korea. And if you’re a Culips Member, then we’d love it if you could join us for the live stream. All you have to do is just log into your Culips account and go to the dashboard, you’ll be able to see all the details about how to join the stream there.

Of course, I talk to Pinky but he’s deaf. He can’t hear anything. So he doesn’t really respond to anything that I say. So I really do miss my wife and can’t wait for her to get back. I’ve been jealous looking at all the pictures that she’s been sending me while she’s away. She’s hanging out at the beach and swimming in the ocean. And I wish I could be there with her, but it just wouldn’t work out with my schedule this time. She’s not just traveling and relaxing though, of course, she’s also working while she’s there. And actually last week on Friday, Friday afternoon, in fact, Anna and I got together to record some new Chatterbox episodes. And one of the episodes that we recorded is about this very topic is about being a digital nomad. A digital nomad is someone who works online and can travel and work at the same time because of that freedom that they have. So I’m not going to go into too many details about this episode, or I’ll spoil it. So, just keep your eyes on your podcast feed so that you’ll see this episode released in the not too distant future. Speaking of Anna, the next Culips episode that we’re going to release this week is a Chatterbox episode that we made together about our favorite quotes. It’s scheduled to come out later this week. And I think you guys are gonna love it. At least I found this conversation really interesting. And I think you will, too. In the episode Anna and I share some of our favorite quotes that inspire us and motivate us. And again, no spoilers. I won’t go into it in too many details here. But you’ll just have to wait a few days until that episode is uploaded, and then check it out for yourself.

So it’s the start of a new week, guys, it’s another fresh opportunity to take on the world.

So what exactly does it mean? Well, to take on someone or something, or to take someone or something on, you can use it both ways. You can say take on [someone], take [someone] on. Take on [something], take [something] on, both ways are OK. It means to fight or to compete against someone or to compete against something. So when I said it’s another chance to take on the world, what I meant was that the new week is another week and another opportunity for you to compete against the world, for you to fight against the world and to make your life better by living it to the fullest this week. Now, this is a super common phrasal verb. I think we use it all the time, especially when talking about sports or other kinds of competitions. But it’s tricky because there are so many different ways that we use the verb take in English, like many, many, many different ways. So I think this is the sort of verb that is really easy to ignore, or to skip over or to miss in your listening or even when you’re reading. You can just kind of skip over this kind of expression. So that’s why I wanted to focus on it here today. And I prepared some example sentences for you to listen to and to learn with. So let’s check them out. We’ll take a listen to them and then I’ll break them down and explain them. And we’ll take a listen to the first example right now.

I have two tickets to see the New York Yankees take on the Tampa Bay Rays.

Jeff says he’s really great at pool, but he always makes an excuse not to play me whenever I offer to take him on.

So in that example sentence, Jeff always makes an excuse to not play his friend whenever his friend offers to take him on. So if you make an offer to someone to take him on, or to take her on, or to take them on, then what it means is that you are asking that person to compete against you. You are challenging that person to a fight or to a competition or to play a game against you. So again, in this example sentence when the friend offered to take Jeff on at playing pool, then he wanted to play pool against Jeff.

For months, the small cafe tried to take on the big franchise coffee shop, but unfortunately, the little cafe just couldn’t compete, and they had to shut their doors forever.

All right, folks. Well, that brings us to the end of this mini episode. Thanks as always, for hanging out and congratulations on getting some English listening practice accomplished here today. Hope you guys have a great week. And I also hope to see a bunch of you during this week’s Culips Members’ live stream on Tuesday. So everyone, take care. Have a great week and we’ll talk to you soon and the next edition of the Culips English Podcast. Goodbye! 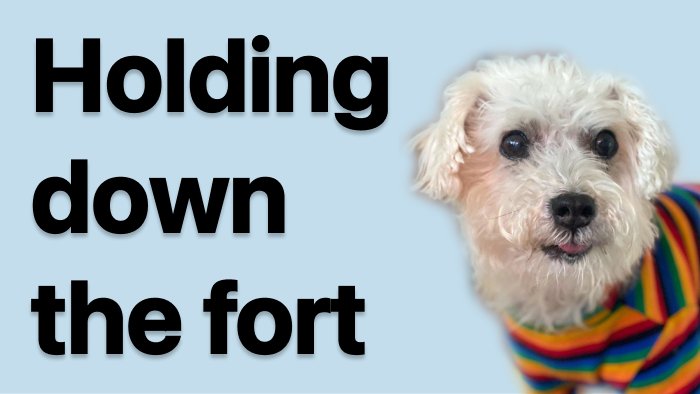 Pinky looks adorable in the cover photo. I remember when I was till in university, I was really excited to holding down the fort while my roommate was away. I can listen to music without putting my headphones on. When you engross in music alone, it feels like you are strong enough to taking on the world.

Absolutely! Being able to blast your music without having to worry about upsetting other people is the best. Thanks for checking out this episode 🙂

I’m Neeltje (Nelly for English people) from the Netherlands. I have been a Culips member since the beginning of this year. I love listening to the podcasts very much. My listening skills are improving, so the last weeks, I amp the speed a little bit up during listening.

You asked for a review about the last episode. In my opinion phrasal verbs are very important to become a more advanced speaker. So, this one is also very helpful for me.

But really, I’m very happy with all your podcasts and transcripts of the episodes. You and your co-hosts learn me a lot of English idioms, vocabulary etc to speak about practical and daily subjects. Now, I feel more confident speaking English on FaceTime or when I’m in America, visiting my son, who married an American girl a few years ago.

Thanks a lot,
Nelly

Thanks for the feedback! I’ll definitely keep it in mind when planning future Culips episodes.

It’s cool to hear you were able to amp the speed up! I think that’s a fun feature to experiment with. When I listen to YouTube or Podcasts in English I often listen at 1.5-2x speed. These days, I even listen to Korean (the language I study) YouTube videos at 1.25x sometimes. When I return to normal speed, everything sounds so slow and it’s easy to understand. I think playing around with the speed controls can really help us develop our listening skills.